This web-based series combines foolproof aspects from the former TV shows that YOU loved with elements that speak to today’s mindful and media savvy viewer, including:

Along with a heaping dose of how-to content, each 30(ish) minute episode will also include: a segment focused on mental & physical health as pertains to knitting & crochet, or a fun glimpse into the shops, groups and lifestyles of our global craft community. We’ll also make it easy for you to be a part of that community through open communication via social media (follow us on Facebook & Instagram!) PLUS, you won’t have to worry about the financial burden of having cable, or the hassle of figuring out when your public television station is airing what you want to watch. This is an egalitarian, inclusive-to-all, knitting playground made for and with you!

The entire first season of The Knit Show with Vickie Howell will be available on The Knit Show website AND be distributed on YouTube at one time — on October 5, 2017. This means whether you’re in Austin Texas, or Melbourne, Australia you can binge watch the season whenever (and as often) as is convenient to you. Oh, and project info and patterns for each episode will be available on this site. Stay tuned! 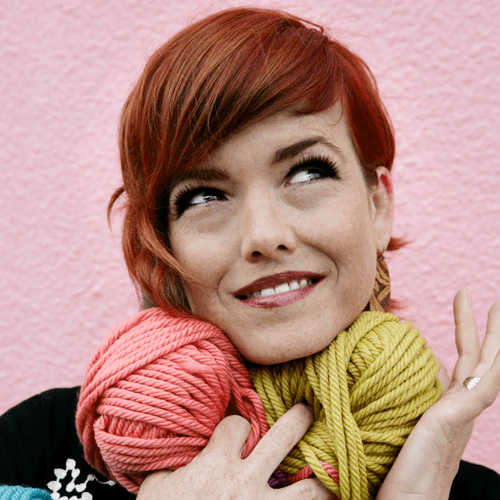 Vickie’s first job in television was when she was 19, as the assistant to the Supervising Producer of a teen-oriented, traveling talk show. Over the next many years, she worked for production companies and major talent agencies before exiting stage left of Hollywood to stay at home with her kids. As part of the craft-revolution she unintentionally found her way back to entertainment, only this time in front of the camera as the youngest craft host on the DIY Network. Since then she’s produced thousands of hours of craft-based programming, all with the common goal of inspiring and empowering people to be creative. ProductionFor is a full-service production and post-production facility based in Austin, TX, with collective decades of experience under one roof. They are creatives, artists, directors, writers, cinematographers, photographers, editors, animators, designers and above all – storytellers.

Thriving on a playing field that is constantly changing, growing and morphing – where the rules are constantly being rewritten –ProductionFor has created a wide range of diverse projects, from national ad campaigns, broadcast commercials and digital ad content, docu-style television pilots and feature packages for networks to music videos, PSAs, brand stories and product-launch visual packages.The ProductionFor collective brings its experience in producing, editing, visual effects, motion graphics and comprehensive production and post-production skills to every project. Traci is a quintuple threat of directing, producing, photography, special effects, and art direction prowess. Her work ranging from album packaging design for greats like Patty Griffin; photo campaigns for the likes of Jack Black & Richard Linklater; Direction for an impressive list of music videos for musicians including Flogging Molly and Shawn Colvin; and field producing for TV hits like Project Runway have earned her nominations and wins for Grammys, Country Music Awards, Academy of Country Music Awards, Tellys and  Addys. Her all encompassing passion for creative expression brings a fresh, visual feast for the eyes to any project she works on. A fan-boy at heart, Dave’s passion for video has followed him from being a film school drop-out to becoming the founder & publisher of the movie news and reviews site, Smells Like Screen Spirit. When he’s not tackling software, and geeking out on music he mixes and edits many of Vickie Howell’s videos and the CRAFT*ish Podcast. Long time fiber industry insider Karin Strom brings a breadth of yarn biz experience to the team. She was editor in chief of Yarn Market News magazine, and editorial director of Interweave’s yarn division, where she oversaw the development of knit.wear magazine and co-produced Knitting Daily TV with Vickie Howell. In addition to producing this show, she is also a consultant in the yarn industry for companies worldwide.